ARE YOU READY FOR THE NEXT PHASE IN YOUR PUPPY'S DEVELOPMENT? 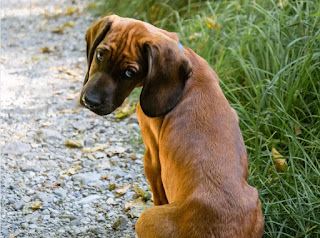 So...you've adopted a new puppy, probably about 10 weeks of age, small, clumsy, affectionate and following you everywhere. Potty training is coming along, puppy's probably learned to sit when asked, almost without effort and you and your new companion seem destined for a beautiful, life enriching future together.

Fast forward another 10 to 12 weeks and you're wondering if your puppy's been switched in the night, replaced by a bigger, stronger, wilful, out of control, doppelgänger.

As a trainer, some of the most frequent complaints dog owners with puppies in this age group, bring to me are:

Dogs reach adolescence as early as 18 weeks of age.

Once a dog has lost all of his/her baby teeth (between 20–24 weeks) they are technically no longer a puppy and have moved into their teen phase.

SURE SIGNS OF ADOLESCENCE

Females
Their first heat will happen between seven and nine months and you will notice:
Frequent urination in tiny amounts (she’s putting out her calling card)
Blood spotting
Frequent licking of the genital area
Flirting or snapping at other dogs

Males
A testosterone spike occurs between five and 18 months. Effects vary but signs to look for are:
Mounting objects, people or other dogs
Defending territory and challenging other dogs
Ignoring you
Running off and not listening
Leg lifting when urinating, leaving only small amounts of urine (in or out of the house, otherwise called marking). Note that both males and females mark outside.

You've probably heard a lot about that critical window between 12 to 16 weeks where your puppy needs to see, hear, touch, experience and join in on as much social activities as possible. The process should continue through your dog's teen months as well. It's especially important for rescues where their prior history is unknown.

You may also notice your puppy suddenly becoming wary and/or fearful of objects, people or situations, they had previously been introduced to with no issues. This is normal and these episodes will come and go. During this phase your 'teen' is not fully in control of his/her emotions. Don't push them to confront the object or person. Allow them to process the incident and move on.

Relax, you’re not going crazy and you’re actually right. Over the last several weeks a swift, dynamic metamorphosis has been taking place. No eerie nighttime switcharoo though, just adolescence.

Often, this is when I’m first meeting a pet owner, rushing in to sign up for training classes. It’s the first time they’ve considered addressing little Rex’s behaviour, other than the potty routine. They’re always concerned and just a little anxious, wondering what future problems lay in store.

Sound familiar? Remember that every dog owner with a new pup has walked (or been dragged) down this road. Adolescence, dogs go through it, just like us.

Knowing a few facts will make your life easier so here’s the scoop on what to expect:

HOW LONG DOES IT LAST?

Onset of sexual maturity happens between seven and nine months for most small to medium breeds, and closer to a year for large breeds. Adolescence itself can last six to 18 months, again depending on the size of the breed you’ve adopted. Typically a 15 pound terrier might be considered fully mature by 12 to 14 months, versus a Burmese Mountain Dog who won’t reach full maturity until closer to 24 or 36 months.

WILL SPAYING OR NEUTERING HELP?

Yes, spaying or neutering will reduce or eliminate most adolescent issues.

Typically, you’ll want to consider spaying just before the first heat, in females or when you notice your male pup lifting his leg in the house or mounting his stuffed toys. You want the procedure to happen before these behaviours become habit.

The first step should be to talk to your vet about the timing since spaying or neutering when performed too early can have an effect on normal growth.

Don’t feel that any prior training has been ineffective. Now is not the time to stop working with your dog. Now more than ever you should stick to regular routines and continue to convey your expectations through learned commands. Show leadership, persistence and patience. Aim at a neutral demeanour, no matter what’s happening. Exhibiting frustration will negatively impact your pup’s willingness to learn in the future. Your pup will one day be that calm, responsive, beautiful companion you've been waiting for. After all, you made it through adolescence with flying colours and your pup will too.

Check THE DOG BLOG once a month for tips on training and canine well being. Got questions? Send along a comment or two. I would love to hear from you.

From the Dog House